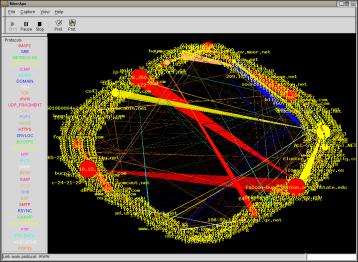 Network slowing to a crawl at OSCon. Image courtesy of Etherape.

Turns out that the clock on my Palm is 15 minutes off. I guess it sync’ed with my laptop last night, on which the battery was dying. Maybe it got messed up then. Dunno. Anyways, I ran way over on my Apache Performance talk. I’ve *NEVER* run over on that talk. Very very frustrating.

But at least now I’m all done for the conference, and now I can just attend and enjoy.

Today’s lunch is brought to us by Microsoft. Thank you, Microsoft.

And a pox upon all the silly people who feel *obliged* to take this opportunity to snipe at them. Being anti-microsoft is getting boring.

Finishing up last minute run-through of my talk for after lunch. Just went to Randal Schwartz’s talk on mod_perl. It was very good, but needed at least twice the time.

Last night’s events were all excellent. Larry Wall’s State Of The Onion was, as usual, unexpected. (If that makes any sense.) And it made me think, unavoidably, that we have this great treasure in jars of clay. And we are all blessed to live in the same era as some of these great thinkers with whom we share this venue.

Paul Graham was funny and brilliant. I hope that a transcript is available somewhere, as I fear that I was aready fading by then, and missed much of it.

And Damian was Damian. I had heard that talk at least once before, perhaps twice. But it was fascinating with a largely non-Perl audience to hear the reactions.

And the keynotes this morning, also, were very good. Tim O’Reilly and Robert Lefkowitz were both excellent, and even insightful. I recommend reading these talks if they are available. Of course, neither will be quite as worthwhile in print, but it gives an idea.

The coffee here at the conference is all Starbucks Coffee, which apparently is an Oregoonian word meaning “burnt”.

I found some willing folks in the Press room, following my interview with OpenFoundry, and went geocaching. It was very warm outside, and we had to walk about a mile there. And then back of course.

This evening is The State of the Onion, and also Damian Conway’s Life, The Universe, and Everything. I believe I’ve seen this (latter) talk at least once before, but Damian is always worth going to hear.

I’m at OSCon, waiting for my tutorial to begin. I spilled $beverage on my keyboard a week or so ago, and it’s starting to seriously gum up. I’m very not happy about this. And, to make it worse, there’s a very shiny 17″ powerbook sitting here on the speakers’ table, and it’s looking very attractive.

I’m still not sure I could get used to that one mouse button thing. And it has a trackpad the size of Detroit.

I wrote some stuff on the plane, but it was on my Palm, and I have not had a chance to sync yet. I’ll probably post it out of chron order.

Every hotel in the downtown area is full. Between the conference and BrewFest, you pretty much have to go outside the city to get a room. My hotel was full, and I had to move to a different room this morning. Why is it that the worse one has to pee, the slower the check-in person is? I suppose this is a special application of relativity.

Oh, yeah, and I also wrote some other stuff this morning at breakfast. I need to sync pretty soon.

The conference is very full. I think it’s going to be a good one.

I’ve just had an apostrophe. Seems that the reason that I enjoyed Wil’s book so much is that it has much the same theme as Dandelion Wine. (Heh. It always comes back to that, hmm?) That is, noticing life as it goes past. But he even goes a little farther — noticing the good bits, really remembering the good bits, and letting the bad bits just fade away. And, of course, enjoying being a kid, even if you’re not a kid any more. 😉

And, as an aside, apparently online snacks and food are terrorist tools. Now they’ve only got diet coke, water, and orange juice. And the flight to Portland has food available to buy. Oy. I’ll bet they have paper knives too. Or perhaps pre-chewed food. I think I’ll eat in Atlanta instead.

Well, if it’s not packed now, it’s not going. (I can’t find the book I’m reading, so I’ll just have to take something else.) I’m off for some lunch with my family, and then it’s off to Portland. See y’all at OSCon.

Going through security was the least painful that it has been in a long time. I suppose that once one gets used to it, it gets better. Or perhaps it really is getting better.

This time, I even had two laptops, and this earned me no more than a half-hearted attempt at a joke.

I brought “Dancing Barefoot” with me. I actually obtained it last year at OSCon, but had not gotten around to reading it yet. I started it in the airport, and finished it shortly after takeoff. Wil Wheaton is a great writer. While the writing style is more akin to blogging than to great literature, he’s smart, funny, and in touch with what it’s like to be a geek in a world that doesn’t understand geeks. Highly recommended, even if you can’t get the autographed version. 😉

Then I started reading “Memoirs Found in a Bathtub” by Stanislaw Lem. It is strange, but it has a historical slant that appeals to me. I’ve often wondered what future generations of archaelogists would think of us if, somehow, our written record were lost. Well, that’s what the book is about

Anyhoo, I’m about halfway to Atlanta, and starting to really look forward to the conference. I’m not quite as prepared as I’d like to be, but I’ll look through my presentation again in Atlanta.

I brought some John Wayne movies, and I’ll probably watch them most of the way to Portland, if my battery holds out.

For no special reason
I am leaving you for awhile tonight
I’m flying far above you
Still I love you
You make things right
…
Well, you know me I’m a nomad
I can’t feel bad
About the way I am
I’ve been rolling around
My whole life
You’re my candlebright in the window
You guide me back again
And I come when you shine
(Candlebright, by Stevie Nicks)

How does one make a 6 year old understand that I love travelling, love going to these conferences, but hate being away from her? I think that she almost gets it. And what’s even cooler, she’s starting to talk like she wants to visit exotic places too. I think that the great adventures are still before us.