Last night I tool Isaiah to see Time Stand Still, the documentary of the last concert tour of the band Rush, as well as a retrospective on their entire career. It included commentary by several well-known musicians who have worked with Rush over the years, and lots of remarks by fans. 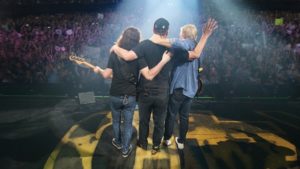 One thing I learned was that, while I’m a big fan, I’m nothing compared to some of these (possibly unhinged) people. Folks who have spent tens of thousands of dollars attending Rush concerts, people who have devoted their entire life to collecting news clippings, concert photos, signed things, and so on, documenting the history of Rush. One guy said he had been to 170 concerts. That’s, conservatively, $5,000, and probably much more like $20,000, or even more, given that these were the front-row crowd. And that doesn’t count travel costs, as some of these folks traveled around the country to attend multiple concerts in any given tour.

I’ve been a Rush fan since (I think) about 1984. I’ve been to three concerts, and each time it was hard to justify the expense to myself. Although the first ticket was a gift, I had to drive 5 hours each way to take advantage of that gift.

But, it was a fun watch – funny, sad, and a lot of fun. It was great to see the friendship that held the band together for 40 years. It was sad to watch them reluctantly admit that they’re just too old to do this any more.  It was great to hear the deep concern that they had for their professionalism as musicians, and how much they cared about producing the best possible show for their fans.

Notably, the song Time Stand Still did not appear anywhere in the movie, but, of course, the lyrics of the song are heard behind everything that the band said about the nostalgia of letting this chapter of their lives slip away

Last night we went to see Rush at Riverbend. It was not quite as awesome as when I saw them in Columbus, but it was still a fantastic experience.

I’ve been a Rush fan for nearly 25 years, and know almost everyone of their songs. In more recent years, I’ve enjoyed their music even more, and have particularly enjoyed the last 3 or 4 albums, in which Neil Peart, the lyricist, has become a very mature and accomplished poet, writing insightful and clever lyrics.

What I discovered in Columbus was the amazing musical talent that each of the three men has – something I should have realized long before, but which became even more evident when watching them. Alex Lifeson is a phenomenally good guitar player, and the fact that he looks more and more like William Shatner as he gets older is only a little disconcerting.

The first half of the concert, I was somewhat disappointed with the playlist, which was very heavy on not-so-well-known songs, and light on the old favorites that people were shouting for. The first half consisted of:

Finishing on Dreamline made up for the weakness of a few of the other choices – like Secret Touch and Digital Man. But, even with that, a powerful show.

The second half, on the other hand, rocked. There were a lot of disappointed people, due to the number of songs from the new album that they just released, and people seemed to want older stuff. When they said “another one from snakes and arrows” there were audible sounds of disappointment. I’m on the other hand, am already very fond of the new album, and they picked most of my favorite tracks from it.

Then, for an encore:

This was my Beloved’s first experience with Rush, and she enjoyed it. We particularly enjoyed trading off the binoculars and watching Neil. For much of the time he was very stoic and focused on doing his job, but there were moments when he was clearly enjoying himself. My goodness he’s talented.

I have never seen that many people in one place smoking illegal substances. And there were several substances being smoked that I don’t believe I’ve ever seen before. Pretty sure the people standing right next to us were smoking crack, although having never seen it before, I couldn’t swear to it. But there was a lot of marijuana on all sides of us. Based on how I felt this morning, I think I may have caught quite a bit of it second-hand.