A Just So Story by Richard Bowen

Long ago in Africa, the Lion, Oh my best Beloved, looked exactly the same as the Lioness. The same beautiful tawny coat. The same sharp teeth and claws. The same terrifying roar. They hunted together, and killed together, and were feared by every animal on the vast veldt, and were called the Tsovereigns of the Tsavo.

However, as is the way of the males of all species, the Lion was vain, and discontent. He went to his wife and said, “Oh my beloved, and oh my hunting partner, you are beautiful and the best hunter in the world. We are feared by all creatures, from the Hyrax to the Hippopotamus. But, my love, why is it that the menfolk of the birds of the air, and of the antelopes of the savannah, have beautiful ornaments, while their womenfolk are drab. I fear that they are secretly laughing at me behind my back.”

And his wife, who was wise, said “Shut up and hunt.”

Still discontent, the Lion went to visit Peacock. After assuring Peacock that he wasn’t going to eat him, today, Lion asked, “Beautiful bird, how is it that you are so adorned with gorgeous feathers, while your wife is brown and plain.”

“First of all,” said Peacock, “do not let my wife hear you say that. Secondly, I had nothing to do with it. We have been this way always, my people.” And he flew away, his rainbow fan tail behind him.

“What is it, oh my hunting partner and equal in everything?” asked Lioness.

“Oh my Pride,” said Lion, “you know I love you, and that I think you beautiful, but though we are feared, from the Duiker to the Dromedary, why do I not have some distinguishing mark or feature or …”

“Oh, that. Shut up and hunt.” said his sagacious wife.

The next day Lion visited Impala, and, after assuring him that he was not on the menu, asked, “Noble Impala, how is it that you have those beautiful curved antlers, while your wife is plain and unadorned?”

“Don’t let my wife hear that, sir. And I had no choice in this. I carry them to protect my family from you, but I did not make them myself.” And he ran away, his twisted horns bouncing above the grass.

Returning to his wife, looking sadder than ever, he began to lament. “Oh my lovely bride, we are feared by all the creatures, from the Eland to the Elephant, but why do I not …”

But his wife, seeing what was coming, said “Shut up and hunt.”

The next day, the Lion visited Weaver Bird. Weaver was busy at work building his elaborate woven home, flashing back and forth from the grass to the nest, his beautiful yellow plumage dazzling in the African sun.

“Oh Weaver,” mourned the Lion, “how is it that you have these lovely bright feathers, while your wife is plain brown? I, too, want to be distinctive and beautiful.”

The Weaver, though small, was cunning and quick thinking, and said “Lion, oh great Tsovereign, I have heard what you have been asking the other Animals, and I think I can help you. As you see, I can craft great works of art from just grass, and I can craft you a great mane. Like Wildebeest, or Zebra, but of course much, much more grand.

“But there is a price, oh great hunter. If I do this thing, you must swear on your new mane that you will not hunt me, or my friends, as long as you wear it.”

The Lion, seeing only his coming glory, immediately agreed. So Weaver set to work.

He wove a great flowing golden mane, that completely encircled the face and head of the Lion, until he was fearsome, and beautiful. Lion’s pride grew and grew, and when the mane was complete, he swore, loudly and for all to hear, that he would never again hunt Weaver, or any of his friends.

Weaver hopped to the top branch of his tree, spread his wings wide, and indicated the entire vast savannah. “All of these animals, all the residents of the vast Veldt, oh great King of the Veldt, are my friends. And you have sworn.” And he flew away.

Lion saw how he had been tricked, but he was a beast of his word, and his pride would not let him take off his mane. So he started to walk home, trying to figure out how he would tell his wife.

Just then one of the other Lions saw him and ran over to ask what he was wearing. Lion began to tell the story, but when he got to the part about the promise, his friend was already running away to find Weaver. And so the word spread.

Now, although the Lion was feared by all, from the Bushbaby to the Buffalo, there is one citizen of the Savannah who does not fear Lion, and that is the Maasai, whose warriors are called the Morani, and who, until that very day, also looked just like his wife. But as Lion approached home, one such warrior crouched in the grass, and seeing Lion’s new mane, determined that he would have it for his own. So he took it from Lion, and fashioned it into a headdress, leaving Lion for the vultures. 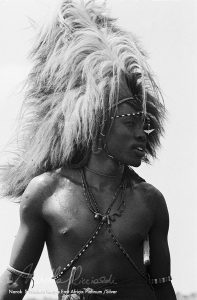 And that is why, oh my Best Beloved, from that day to this, Maasai Morani wear a lion mane headdress, and the lion’s wife does all of the hunting. 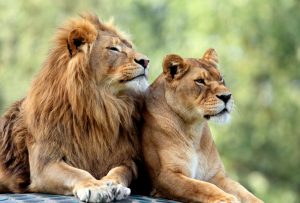