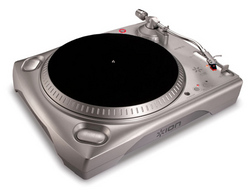 Someone has *finally* come out with exactly the product I want. A company called Ion has announced a USB Turntable which lets you play an LP directly into your computer. They apparently ship Audacity with it, to make the process easier. Although Audacity doesn’t do the greatest job of removing background noise.

These things are just $139, which, although hardly free, is far less than the combination of gear that I was considering buying to convert the stack of LPs I have to CD. And it’s much more what I actually want than hundreds of dollars of stereo equipment that I’d hardly ever use.

They will be available on tax day, so I’ve got a little while to save up. I suppose I should wait for a review or two, but I probably won’t. At least, unless the tax fairy is particularly hard on me this year. 😉