“Sit anywhere.”
He pushes some things off of Paul’s chair –
a swirly sky of stars,
a couple sleeping on a hay stack.

I stub my toe on pair of old black boots,
brush my elbow on some cherry blossoms,
and sit.

“Just a few things I’m working on,
they’re not done yet.”
He wipes a smudge of paint from his cheek,
gestures with a paintbrush,
getting yellow on the floor.

So much beauty scattered about
it’s hard to squeeze through
without knocking over
a vase of dandelions. 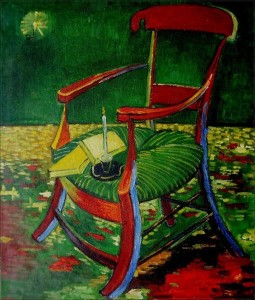 A postcard of the sunflowers,
rather like a Chick tract,
a blasphemy, in the hands of too many people.
Like CliffsNotes of the Brothers Karamazov,
condensing into ninety-six pages
two years of Fyodor’s tears.

And then, picture Vincent, at the same time
amused and flattered, depressed and enraged,
that everyone in the world
has an imperfect copy
of this gift to a friend.