As I’ve mentioned before, whoever is handling the ad campaign for the UNCF isn’t doing their research. In a new ad, they state that Alfred Cralle invented the ice cream scoop. 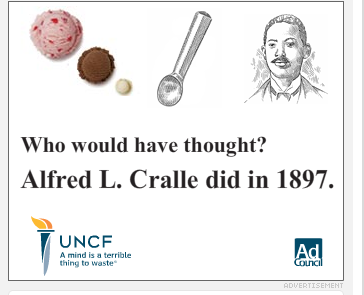 Which he did, but the picture shows a simple spoon-style ice cream scoop, rather than the variety that Cralle invented. What he invented was far cooler – a scoop with gears and lever which scoops the ice cream out of the bowl of the spoon.

So that’s another ad that they’re running where they claim that an african-american inventor invented something, when in fact he invented something much cooler. Why would they do this? Come on, folks, do your research a little better. Or, UNCF, get a better ad agency.