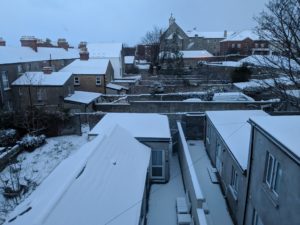 Thomas Butler,
my great great
great great
grandfather
was a wool weaver.
I hope to find him today,
sleeping in his homespun
at St. Catherine’s.

But my Irish roots are right here
at the breakfast table.

Good Lord, these people know how to eat.

And the coffee is good.

These are surely my people.