This is part 4 of a series about my visit to CERN in Geneva. You can read the entire series here: https://drbacchus.com/cern-centos-dojo-2017/

On Friday evening, I went downtown Geneva with several of my colleagues and various people that had attended the event.

CERN is right on the France/Switzerland border, so we’ve been going back and forth between the two countries several times a day, often not really knowing what country we were actually in.

I had been to Geneva when I was younger, but I really couldn’t say for sure when that was. The only thing I remember was the fountain – the Jet D’Eau – so I wanted to see that again. It was every bit as impressive as I remembered it. 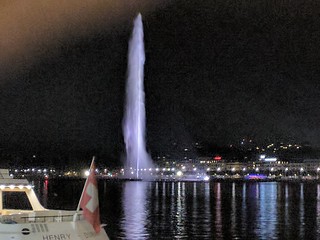 However, it was the end of a very long day, and between that, and jet lag, I was absolutely exhausted, so headed back to the hotel. I hope to go downtown again for a few hours this afternoon, but I kind of wanted to get these articles written while the memories were fresh.

When I was a kid, I dreamed that some day I would have a job traveling around the world, getting paid to see cool things. I think a lot of people dream of that. I have had the amazing good luck to achieve that goal. I have the best coworkers in the world, and I get to do things that I’m passionate about, every single day. The only way that this could be better is if I could have my beloved travel with me. Perhaps some day.

On Friday, I attended the CentOS Dojo at CERN, in Meyrin Switzerland.

CentOS dojos are small(ish) gatherings of CentOS enthusiasts that happen all over the world. Each one has a different focus depending on where it is held and the people that plan and attend it.

You can read more about dojos HERE.

On Friday, we had roughly 60-70 people in attendance, in a great auditorium provided by CERN. We had 97 people registered, and 75% is pretty standard turnout for free-to-register events, so we were very pleased.

You can get a general idea of the size of the crowd in this video:

There was an emphasis on large-scale computing, since that’s what CERN does. And the day started with an overview of the CERN cloud computing cluster. Every time I attend this talk (and I’ve seen it perhaps 6 times now) the numbers are bigger and more impressive. 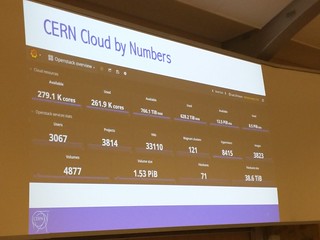 This time, they reported 279 thousands cores in their cluster. That’s a lot. And it’s all running RDO. This makes me insanely proud to be a small part of that endeavor.

Other presentations included reports from various SIGs. SIGs are Special Interest Groups within CentOS. This is where the work is done to develop projects on top of CentOS, including packaging, testing, and promotion of those projects. You can read more about the SIGs here: https://wiki.centos.org/SpecialInterestGroup

If you want to see your project distributed in the CentOS distro, a SIG is the way to make this happen. Drop by the centos-devel mailing list to propose a SIG or join an existing one.

The entire day was recorded, so watch this space for the videos and slides from the various presentations.

The CERN folks appeared very pleased with the day, and stated their intention to do the event again on an annual basis, if all works out. These things aren’t free to produce, of course (even though we strive to make them always free to attend) so if your organization is interested in sponsoring future dojos, please contact me. I’ll also be publishing a blog post over on seven.centos.org in the coming days about what’s involved in doing one of these events, in case you’d like to host one at your own facility..

Over the last few days I’ve been in Geneva for the CERN CentOS Dojo, 2017 edition.

(This is part 1 of a series of four posts. They are gathered here.)

On Thursday, prior to the main event, a smaller group of CentOS core community got together for some deep-dive discussions around the coming challenges that the project is facing, and constructive ways to address them.

This meeting was very potentially productive. I say potentially because some great decisions were made, with universal approval, but everything depends on the execution. Some of these decisions will take a great deal of work over the coming months. Of course, nobody is averse to hard work, but we all also have other things to do. So we need to keep the long-term health of the project firmly in mind, and find time for these tasks.

Todays CentOS Contributors meeting at @CERN has found a new side project! pic.twitter.com/qO1tJZGVeN

The full notes from that meeting have been posted to the Centos-devel mailing list for further discussion.

The attendees were from many different organizations, countries, and cultures. While the various organizations represented have rather different goals and motivations, there was great unity of purpose – ensuring the long-term health of the CentOS project.

Topics covered were focused on removing roadblocks to forward movement on the project, and removing obstacles to new contributors to the project coming on board and getting things done. This was very encouraging.

We were disappointed that a number of prominent community members were unable to attend. Notably, Karanbir was absent due to a broken toe:

Emergency hospital trip today evening. This means that I can’t make it for the CentOS Dojo at CERN this Thursday & Friday

Continuing discussion of the topics will happen on the centos-devel mailing list, and, as always, people who want to step up to assist in any of the identified tasks are encouraged to speak up and volunteer.

CentOS is a community of project communities, and works best when those projects identify the things that will make them more productive, and then step up to make those things happen.