Last month at the OpenStack Summit in Atlanta, the highly-anticipated OpenStack user survey results were released. For reasons of respondent anonymity, the raw data of the survey will not be released, but rather just a summary of the numbers. Even with that, the new numbers are very interesting.

It should be noted that the results of any survey like this have to be understood in the light of the respondent sample set. People answering this survey are those who are somewhat engaged with the OpenStack Foundation, and (obviously) aware that there even is a survey. When software is available freely, like OpenStack, there is simply no effective way to contact everyone that’s using it, so we’re necessarily seeing only a small percentage of the total population, and have to hope that it’s a representative percentage. There’s also a lot of marketing of the survey in the various “camps” in the OpenStack ecosystem, trying to get people to fill out the survey. Here, too, we have to hope that this is roughly fairly distributed, and does not itself skew the results.

The results of the survey are here: http://www.slideshare.net/ryan-lane/openstack-atlanta-user-survey

As the RDO community guy, of course my initial interest was in the distribution of deployment OS platform, as well as the deployment tools. 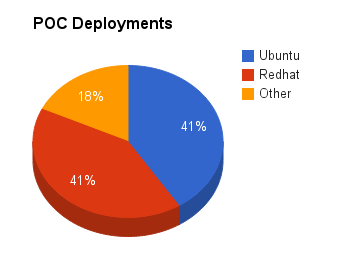 *Note: Graph corrected – I had the wrong numbers in this earlier* 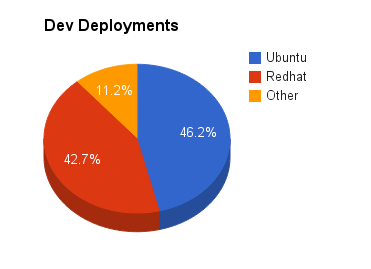 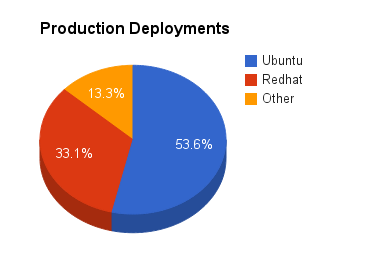 Note that since the survey combines paid and non-paid Ubuntu, it seems reasonable to combine CentOS and RHEL deployments. I’m sure that there won’t be universal agreement that that’s the right thing to do. So be it.

Compare these to the numbers six months ago: 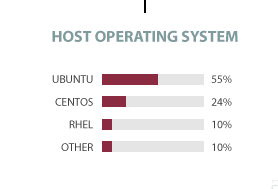 We’re not comparing apples to apples here, but here’s a graph of all the combined deployments across the categories, in the 2014 survey: 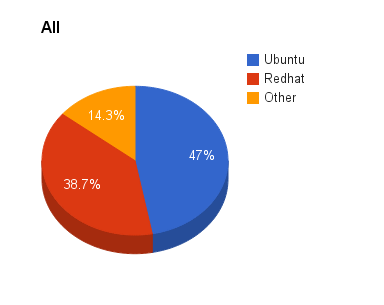 Several interesting conclusions that I draw from these numbers. Although, again, we’re not comparing apples to apples, so I’m sure that other folks will interpret differently.

Overall, the Ubuntu to RHEL/CentOS split moved from 55/34 to 47/39, indicating, overall, a movement away from Ubuntu towards CentOS and RHEL as the preferred platform for OpenStack deployments.

More interesting, looking at the breakdown into poc/dev/prod categories, there’s an even stronger motion towards CentOS (and RHEL) as a preferred platform for *new* deployments. Looking at the versions deployed in production, it’s clear that once folks have something deployed, they leave it alone, with a pretty high number of people running versions that are as far back as Essex, Diablo, or even earlier.

On the deployment tool side, I think that the question could stand to be clarified. I wonder, of the people who indicate that they are using Puppet or Chef to do their deployment, whether they’re using another tool such as crowbar or packstack to run those tools, for example, or if they’re actually writing their own Puppet/Chef scripts. I would also have expected, just anecdotaly based on various conversations, to see devstack much further out in front. Perhaps I’m just talking to a rather unrepresentative group – which is, of course, why surveys like this are so useful.

Also of great interest to me is the distribution of industries. I need to do more work on comparing the numbers side-by-side, but the academic sector (the #2 industry) has grown against the previous survey, from 11 to 13%, and some other industries have also grown a little. The fact that IT is still far and away the largest consumer of this stuff seems to confirm everyone’s impression that we’re still very early days in this stuff, and the more we see it grow in non-IT industries, the more we’ll know that it’s here to stay. (It also seems likely to me that people outside of the IT sector are unaware that there’s even a survey to fill out.) So that’s something to keep watching in the next time around.