We’ve been looking for a decent set of knives for a while. The ones I really want tend to cost too much to consider. The ones we can afford lose their edge in a matter of months.

A few weeks ago we saw an advertisement for the Kershaw Komachi knives. They’re brightly colored, and come in a clear plastic block, making them look like toys. But they’re reasonably priced, and the reviews are always great. And they’re made by Kershaw, which is a reputable knife company, at least in the realm of pocket knives. I used to have a Kershaw, and it was my regular pocket knife, until it was lost/stolen/strayed. 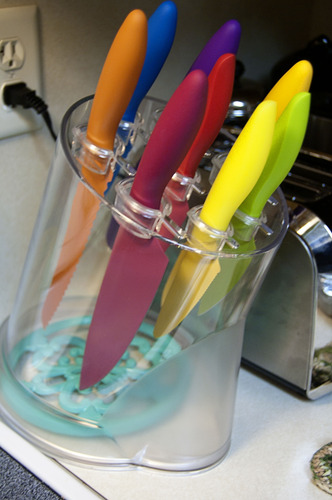 We are very pleased with them. They’re the sharpest kitchen knives I’ve ever owned. They’re very lightweight, which I thought would make them feel cheap and flimsy, but they’re nice to use, and I have no complaints at all, other than the fear that E will at some point think that they’re a toy and grab them.

Time will tell how the edge holds up to usage.