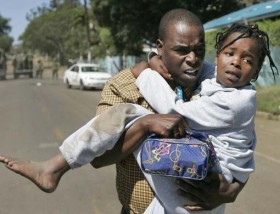 I saw this picture today on GulfNews.com. A young man – about my own age – runs with his daughter – about my daughter’s age – while she looks obviously terrified. I can’t quite imagine what I would do, faced with the situations that have been forced on thousands of moms and dads in the last two weeks in Kenya. I know that I would do anything to protect my daughter. What would I do if someone took my daughter from me and flung her into a burning building, and prevented me from going in after her? I don’t know. It is unthinkable. But a mom had that happen to her just two weeks ago today, in a town that I have always thought of as a sleepy, friendly, quiet country town. How does one live with that reality – either of having it done to your daughter, or of being the one that did it?

With that kind of thing going on in my homeland, it’s really very hard to care who’s winning the US presidential primaries. Ironically, though, these primaries will have a significant impact on Kenya in the very near future. Who’s in the White House, unfortunately, indirectly (and some times very directly) effects what goes on in Africa.

Meanwhile, the 10th Parliament had their first meeting yesterday, and the opposition majority elected an opposition Speaker, which will probably have the effect that the President will either not be able to accomplish anything for the next 5 years, or that he’ll simply ignore the constitution and the laws of the land, and do whatever he choose anyways. Events of the last two weeks seem to suggest which of these options he’ll choose.

Today, there are battles between opposition supporters and police, in which the police are armed with live ammunition and tear gas, and the opposition supporters have signs and large numbers. One death is reported, but one expects the reality is worse. The sun has gone down now, and it’s been raining most of the day, so hopefully things are quiet right now.

It’s very, very hard to get out of the deep sadness that these events are causing me. This isn’t supposed to happen in Kenya. Kenya hosts refugees, it doesn’t produce them. Kenya is peaceful, stable, and friendly. Kenya is Hakuna Matata. Kenya is home. It’s beginning to feel like I’ll never make it back home again.