During the first two weeks of May, I attended Red Hat Summit, followed by OpenStack Summit. Since both events were in Boston (although not at the same venue), many aspects of them have run together. 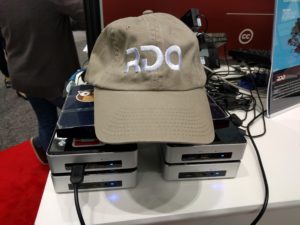 On the first day of Red Hat Summit, I received the mini-cluster, which had been built in Brno for the April Brno open house. There were one or two steps missing from the setup instructions, so with a great deal of help from Hugh Brock, it too most of the first day to get the cluster running. We’ll be publishing more details about the mini-cluster on the RDO blog in the next week or two. However, most of the problems were 1) it was physically connected incorrectly (ie, my fault) and 2) there were some routing table changes that were apparently not saved after initial setup.

Once the cluster was up, we connected to the ManageIQ cluster on the other side of our booth, and they were able to manage our OpenStack deployment. Thus, we were able to demonstrate the two projects working together.

In future events, we’d like to bring more projects into this arrangement – say, use Ceph for storage, or have ManageIQ managing OpenStack and oVirt, for example.

After we got the cluster working, in subsequent days, we just had to power it on, follow the startup instructions, and be patient. Again, more details of this will be in the RDO blog post in the coming  weeks.

I had conversations with two groups about planning upcoming CentOS Dojos.

The first of these will be at Oak Ridge National Labs (ORNL), and is
now tentatively scheduled for the first Tuesday in September.  (If you saw my internal event report, I mentioned July/August. This has since changed.) They’re interested in doing a gathering that would be about both CentOS and OpenStack, and draw together some of the local developer community. This will be held in conjunction with the local LOPSA group.

The second Dojo that we’re planning will be at CERN, where we have a great relationship with the cloud computing group, who run what we believe to be the largest RDO installation in the world. We have a tentative date of October 20th, immediately before Open Source Summit in Prague to make it easier to combine two trips for those traveling internationally. This event, too, would cover CentOS topics as well as OpenStack/RDO topics.

The Community Central area at Red Hat Summit was awesome. Sharing center stage with the product booths was a big win for our upstream first message, and we had a ton of great conversations with people who grasped the “X is the upstream for Red Hat X” concept, seemingly, for the first time. The “The Roots Are In The Community” posters resonated with a lot of people, so huge thanks to Tigert for pulling those together at the last minute.

The collaboration between RDO and ManageIQ was very rewarding, and helped promote the CloudForms message even more, because people could see it in action, and see how the communities work together for the greater good of humanity. I look forward to expanding this collaboration to all of the projects in the Community Central area by next year.

The space for Red Hat Summit was huge, making the crowd seem a lot smaller than it actually was. The opposite was true for  OpenStack Summit, where it was always crowded and seemed very busy, even though the crowd was smaller than last year.

In three weeks I’ll be heading to the High Performance Computing event in Frankfurt. My mission there is to talk with people that are using CentOS and RDO in HPC, and collect user stories.