I’ve alluded a few times to driving in Kenya, so here’s a little more on that topic.

It is terrifying. And the drivers seem completely at ease with the terror.

There are no stop lights. No stop signs. Barely any signs of any kind. And the drivers just know what to do. I was amazed by how few dents I saw on cars while I was there.

I did see some traffic lights while was there, 2 or 3 times, but they were purely decorative. Nobody was paying the least bit of attention them. And I did, in fact, see a stop sign once or twice. There was no evidence that anyone else was aware of what it meant.

When you come to a major intersection (did I mention, no lights or signs?) people just go. They find a gap, and they go for it, and the other drivers look like they’re not going to let them in, but somehow it works out. Clearance around cars is inches, at best, but it all somehow works out, with very few accidents.

And then sometimes, traffic just … stops. For 10, 15, 20 minutes. Just stops. And then something clears up, and it starts again. This happens a lot in the evenings.

There were numerous situations where we’d be flying along at 125kph (75 mph) and then suddenly we’d be at a standstill. As you inched along, you’d realize that a matatu (passenger bus) had just stopped in the road. Sometimes in the middle lane. Sometimes to pick up and drop off passengers, but sometimes it was because they had broken down, and were fixing it, right there, in the middle of the road. This was not an isolated event.

Meanwhile, among all of this, bicycles and motorcycles and pedestrians are all just weaving around among traffic, and I didn’t see one crash the entire time I was there.

Oh, also, any time the traffic slows down, there are vendors walking between the lanes selling everything, from food to live animals to toys to windshield wipers. I saw one guy selling neck ties, soccer balls, and an inflated Spiderman. Another had dog leashes and slingshots. And another had a book and two scrabble games. All just wandering in and out of traffic while we were driving along.

On the way to the airport on the last evening, the driver had a music video playing on the car stereo screen. Which seemed somehow not very safe. But he was navigating traffic just fine.

And then there are speed bumps. Just randomly, you’ll encounter a speed bump, And they are huge, such that most cars end up crabbing over them to avoid high-centering or, best case, scraping the bottom of the car on them. And folks don’t seem to be at all bothered by this.

When I left Nairobi, the population was just under 1 million. It’s now around 4.5 million, and a huge percentage of those people have cars, which was not the case in 1988.

There’s a fancy new expressway that goes from Westlands to the airport. You can get there in less than 20 minutes, even when traffic is terrible. It’s elevated, and is built in the median of other roads. Most people use the lower road, since the upper road is a toll road, so the expressway is largely empty. 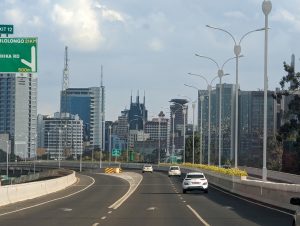 It turns out that there’s more to this story, though.

This entire expressway was built in just 8 months. This happened because the outgoing president, Uhuru Kenyatta, wanted to leave a legacy, and realized that he was running out of time. So he made a huge deal with the Chinese government to come in and build this. Also, he happens to have a large interest in the construction that happened to get the contract. And this was largely done without the government approving it. He just … did it.

So there’s definitely a love/hate thing with the road. It greatly improves traffic – although only for a subset of the drivers who want to pay a toll. But it leaves the country with a huge debt to pay – both financial, and in leverage by the Chinese government.

Also, in the process, thousands of trees were cut down, which gave a lot of shade to pedestrians. And it’s made it very difficult for pedestrians to get certain places, because the construction destroyed a lot of sidewalks in places where there used to be a lot of pedestrian traffic. People were very upset by the trees, some of which were decades old and popular gathering places.

I briefly considered renting a car, when I was planning this trip. I’m awful glad I didn’t.

This site uses Akismet to reduce spam. Learn how your comment data is processed.