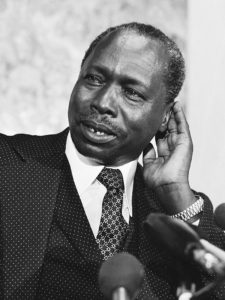 The conversation about the death of former Kenyan President Daniel Toroitich arap Moi is complicated, from where I sit. His death is the end of an era, in many ways – the last of the colonial era African strongmen. But he’s also one of the very few powerful African presidents who stepped down at the end of his term, and let the new president peacefully take over. Yes, “he followed the law” seems like an awfully low bar, but at the time, it was a really big deal.

The conversation that’s happening on Twitter is, for the most part, focusing on the terrible parts of his legacy. The torture. The murder and incarceration of his enemies. And, truly, there’s no excuse for that. Only that he apologized, and stepped out of the public eye to let his successors carry on.

But, for me, there’s another layer. When I was a kid, you didn’t speak ill of Mzee. Heck, you didn’t *think* ill of him. You didn’t criticize him in the most private of private places, because you knew that the CID would come drag you away. BBC had a good article today about how Kenyans learned to laugh at Moi.

And I also remember when Amnesty International issued a statement condemning Daniel Moi, I was aghast, and refused to believe the things that they asserted about him, even though I now know them all to be not only true, but probably only a fraction of what he actually did.

When Moi became president, in 1978, upon the death of President Kenyatta, he had a lot of opposition from people who had someone else in mind. Over the years, he became more and more dictatorial, and his government more and more repressive, particularly after the failed coup attempt in 1982.

Meanwhile, in the USA, we are moving into an era where a senator is vilified, and threatened with removal from office, for voting his conscience against his Great Leader, and the days of us mocking third-world countries for this kind of reprehensible behavior seem a long time ago.

At his funeral yesterday, while dignitaries spoke glowingly about the Great Man from the podium, someone in the crowd dared to heckle, and was dragged away, just like in the old days. Some things don’t change so much.