Back in December I received my replacement hearing device, the BAHA 5 Power. 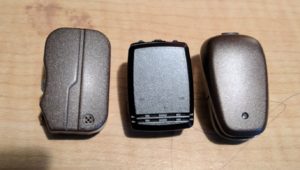 The photo shows the last three generations of the BAHA. The one on the left i the one I was replacing – the “Intenso”. The one in the middle is, I think, the BAHA 3, which is what I had as a loaner while waiting for the replacement. The one on the right is the 5.

One of the features of the 5, which makes it practically magical, is that in high noise situations it can make it possible to hear voices. I was a little skeptical, but I had the first opportunity to test this on Friday night when I attended a gathering of Asbury Math department alumni. The room was very noisy, and I turned on the “noisy room” setting. For a moment, everything got a lot louder, and then after a few seconds – I presume it had to calculate ambient noise of whatever – the roar  of the crowd lowered, and I could clearly hear the person next to me – professor Ron Welling, who taught me Abstract Algebra back in 1991 or so – and understand his words.

I’m reminded of meeting Vint Cerf, and his wife, in 1996 or 1997. Someone asked him to think back over the technology advances in his lifetime, and say which one was the most amazing. Rather than talking about the Internet, he said that the most amazing, almost magical, was his wife’s cochlear implant, which let her hear and understand speech, after decades of hearing nothing. At the time I had a Xomed Audiant, which was a very early generation of what I have now.

Each generation of this technology gets more amazing. The new one even does Bluetooth! But the voice enhancement and noise reduction is truly amazing. I expect it to make attending conferences much more bearable.