During the early years of the 2000’s, during a very hard time in my life, I relied on three things to keep me sane – Apache, Kites, and Geocaching. For three very different reasons. I find myself turning to them the last few weeks during another, very different, difficult time.

Apache – The Apache Software Foundation – is an organization that provides free software for the public good. It has, numerous times, defined new technologies, or revolutionized existing technologies. The original project – the Apache Web Server – created the web as we know it, in a very real way. By making a free alternative to the two commercial products that owned the early web (Netscape Server and Microsoft IIS) it made the web accessible to everyone. Contributing my time to that project was a way that I could make the world a better place. It was making life easier for real people solving real problems, and it was meaningful work. That was the main reason that I spent my time working on the Apache Web Server during those years, and why I have stuck with the project for 20 years.

Geocaching had a very different motivation. It was a way to get outdoors, while also playing with technology, and that was certainly part of it. But I think what was so great about it was that it was a task with a clear goal, and you could check it off when it was done. You find the thing. You sign the log book. And when you’re done, a friendly smiley face appears on the map.

Along the way I met some friends, and over the last two weeks when I’ve been ‘Caching, I’ve noticed a lot of those old names reappearing – Dee Whoa, and Moontwig – while seeing a bunch of new names. Skallywags have been just ahead of me on several of the ones I found this week.

And kites. I’ve always loved kites. I have memories of kites going back 40 years. I wrote a poem about kites, and the stability that the lend to life.

Kites are simplicity itself – tuppence for paper and string – But can also get as complicated, and expensive, as you like. Flying a kite takes all of your concentration – or you can just lay on your back and watch it – depending on the winds. I love love love my kites. I love flying. I’m very annoyed when the winds are not helpful. You can put up a kite – or six – and spend a whole afternoon doing nothing at all, and not feel that the time was wasted. 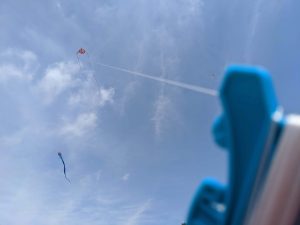 Yesterday I got some repair stuff for my kites, and now I have (I think) 8 functional kites, (3 shown in the above photo) if I can get a big enough field and the right wind.