I arrived at the airport around 5:30 am. First time in Kenya since 1988 – 34 years – but the airport was pretty much the way that I remembered it. I’m sure it’s larger.

Customs and immigration were painless, and my suitcase was out before I got to baggage claim. No complaints there.

After a little hassle trying to get some cash, I got a cab to the Jacaranda Hotel in Westlands. 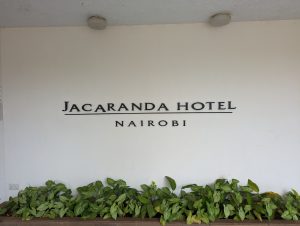 Along the way I was just staggered by how everything has changed. Everything. The roads to the airport is very nice (which probably needs its own blog post!) and there are so many new buildings.

Granted, it has been 34 years. The driver was amazed that I had been gone so long. He was 5 when I left! 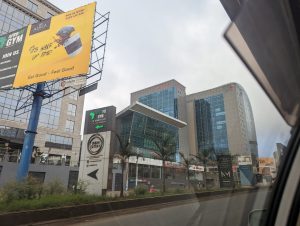 I didn’t take enough pictures – Maria says I never do – but here’s a picture of the Oracle building close to my hotel.

The hotel is beautiful. I am sure I have been here before, possibly to use the pool? Not certain. It’s showing its age, but it’s still an oasis in the middle of a very busy part of the city. I can, however, see the expressway out of my window. 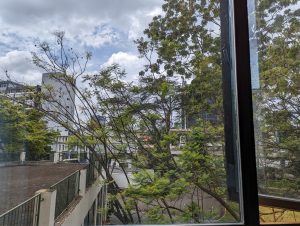 This is my second room – they moved me to a nicer room the first day I was here. Larger, although the view isn’t quite as nice.

In my first room I had a view of the central pool and courtyard, which was quite lovely. 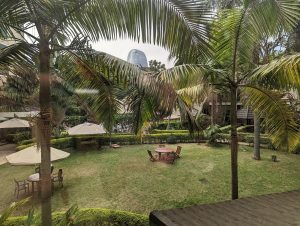 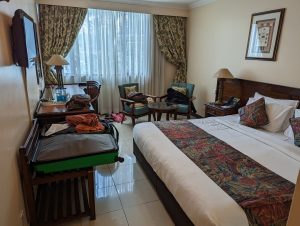 After a short nap, and breakfast, I summoned a car and went to Good Shepherd Church, which is where we went when I lived in Nairobi in the 80s. 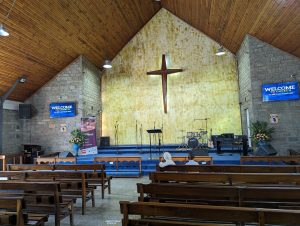 It was nice to visit, although I didn’t know anyone, and after hanging around for a while feeling awkward, I walked the 2 or 3 miles back to the hotel.

Walking was a bit treacherous, with sidewalks alternated by mud paths and the occasional sudden gaping hole into the sewers. You have to stay alert.

And the traffic. Wow. That, also, probably needs a separate blog post.

I had lunch at the Artcafe restaurant one block over, but, alas, they were out of samosas, which is specifically what I went for.

In the afternoon I sat out on the central courtyard and read, which was delightful.

Later, I met with the people from SpaceYaTech, which I have already written about. And by that time it was dark, and I had dinner at the bar and restaurant there in the pool courtyard.

In all, a thoroughly lovely day.

It’s not home any more, but it’s home-ish, and it’s lovely to be back. 34 years is an entire lifetime, and everything here has changed, radically. Although some things are still the same. It’s a weird mix, and it would take longer than a week to unwrap all of it.