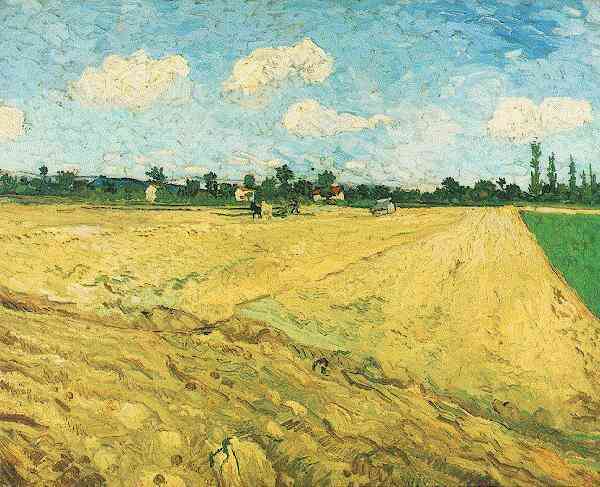 No print can ever again convey
close enough to touch,
feel the farmer and his horses
leaning so far out of the canvas
I think they might fall
and out of the corner of my eye
I think I saw a petal fall
from the sunflower.

Day One in Amsterdam was very eventful, and, although I have a huge amount of work to do today, I felt that I owe it to you, loyal readers, to catch you up on the doings.

I arrived here in Amsterdam at just before 6am on Friday. Having not slept much during the 6-hours-shorter night, it took me most of the day to figure out that it was in fact Friday. I think today is Saturday.

My flight was, inexplicably, on time, which threw me off balance a little. After a little confusion, I found a cash machine at the airport and got a train ticket. Three stops later, I was at Central Station, and just a brief walk from the hotel. I decided to walk, rather than get the tram, in the hopes that it would wake me up a little bit. And I could see the hotel from the station as soon as I exited.

When I got to Hotel, my room wasn’t ready. After all, it was before 7am, and check-in time isn’t until 3pm. So I went to the bar to hang out, and quickly started to fall asleep.

The hotel is blanketed in Wi-Fi, and there’s good strong connections available pretty much everywhere I’ve sat down so far, including the restaurants. I hopped on the network, and called my Beloved, waking her up at about 1 in the morning. For those of you who haven’t had this experience, let me take a moment to tell you how delightful it is to wake someone up at 1 in the morning and have them be happy about it. 🙂 I promise I won’t make a habit of it.

When it became obvious that there’s no way I was staying awake any longer, I went back to the desk and badgered the poor overworked receptionist until she found me a room. I came up and immediately fell asleep.

I was woken up at 2pm by a test of the alarm system. I had been warned, by Charel, that this would happen. She happened to wander up while I was checking in. However, I didn’t expect to sleep that long, and so was woken from a very very deep sleep, and didn’t really wake up until I had been outside in the baking heat for about a half-hour, waiting for the alarm to die down.

Now that I was awake, I decided to make the best of it, and I headed off towards the Van Gogh museum. I’m pretty sure I have been there before, but I imagine I was 9 or 10 when it happened, and have almost no recollection of it at all. Van Gogh has long been a favorite. My very favorite of his paintings – at least until yesterday – is Starry Night, which is at MOMA, rather than here. However, after sitting in front of Sunflowers for about a half hour yesterday, I don’t imagine I’ll ever look at a Van Gogh print in the same way again. I’m now persuaded that the phrase “Van Gogh print” is a logical contradiction. Van Gogh’s paintings can only be appreciated, I mean really appreciated, in person. The paint juts from the canvas. It’s not so much a painting as a sculpture in paint. As I said to my Beloved yesterday:

There’s this painting called “Ploughed fields“. Farmer, two horses. Black one on the right, white one on the left. (Their left, not mine.) The white one, when you’re not looking, is facing forward and ploughing. But when you look at him, he turns his head towards you, and his nose pokes waaaay out of the canvas. You can almost catch him moving out of the corner of your eye when you turn away. I’m pretty sure he did.

And the sunflower … well, they were simply unbelievable. I don’t know how to describe it, really. I imagine you can read a dozen descriptions, and they are just not the same as being there. I might just have to overcome my hatred of New York City just long enough to go there and see Starry Night at MOMA.

After leaving Van Gogh, and running into Sander and Laura in the lobby on the way out, I went over to the Rijksmuseum, but I have to admit I’m not much of a fan of that era of painting. A lot of it feels like pre-photograph photography. Some of it was indeed stunning, but most of it was not of a great interest to me. Of course, having said that, I’m also aware that yesterday I saw some of the most famous paintings on the planet, and so I spent a lot of time looking at them, even the ones I didn’t particularly like, because otherwise some day I’d look back and wish I had.

The biggest contrast was that Van Gogh used paint to create texture, as well as being very experimental with color. Most of the paintings at the Rijksmuseum were portraits intended to … well, portray. They were smooth, and for the most part photorealistic, although some of them did interesting things with light.

I had decided to walk rather than take a taxi or tram, partially to save money, and partially so that I could see the streets. I got lost a number of times, and, of course, getting lost in any great European city is at least half of the charm of walking. I simply love the fact that you could live in a city like this and never have to own a vehicle, or, at the most, have a bicycle. Being able to walk or bike to everything you might ever want is, in itself, a reason to live somewhere like this. Not sure I could stand the noise at night for very long, but perhaps I’d get used to it.

On the walk back, I took a slightly different route – that’s another nice thing about not knowing your way around, you discover interesting routes all the time. 🙂 I hoped to stop somewhere to eat, but ran out of money, and nowhere took AmEx. Perhaps I’ll have more luck – or more cash – today. We’ll see.