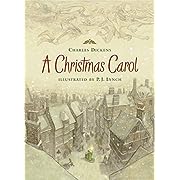 I may have mentioned before, I have a problem. I find it very hard to not buy new editions of A Christmas Carol that I find. Mostly, I resist, but occasionally I encounter one that I simply can’t resist.

I particularly like the picture of the uncountable children and the christmas present delivery man, complete with the baby and her toy frying pan.

Ken has posted the photos of us with Arthur C. Clarke.

Yesterday a few of us got the opportunity to go visit Sir Arthur C Clarke at his home in Colombo. He just recently had cataract surgery, and so didn’t want a lot of flash photos taken. Several pictures were taken with Ken’s camera, and hopefully I’ll have them soon.

Sir Arthur is still a great presence in the room. Knowing that one is in the same room with the guy that wrote Rama was pretty amazing.

His home is full of the awards and collections of a full life. There were signed photos from the crew of various spacecraft, as well as various movie spacecraft crews. And the original geosync paper was there in a frame.

Danese sent some photos, which she had taken last year, for me to give to Sir Arthur. I had them on my ApacheCon US ’05 flash drive. The guy that handles the computers there wasn’t in, and so I ended up leaving my flash drive with him. So Arthur C Clarke now has an ApacheCon flash drive, which is kinda cool. I wish we’d taken an ApacheCon T-Shirt to him as well.

I’ve now met two of the authors whose work I most admire – Arthur C Clarke and Douglas Adams. And having seen a little of Sri Lanka, I can understand why someone would choose to live here. It is certainly very beautiful. Sir Arthur is evidently held in very high regard by the people here.

My sister passed on to me this poem by Billy Collins, the poet laureate. It’s *brillliant*, I tell you! At last, someone else who agrees with me that Anna Karenina is unmitigated drivel.

I must have started reading this monster
a decade before Tolstoy was born
but the vodka and the suicide are behind me now,
all the winter farms, ice-skating and horsemanship.

It consumed so many evenings and afternoons,
I thought a Russian official would appear
to slip a medal over my lowered head
when I reached the last page.

But I found there only the last word,
a useless looking thing, stalled there,
ending its sentence and the whole book at once.

With no more plot to nudge along and nothing
to unfold, it is the only word with no future.

It stares into space and chants its own name
as a traveler whose road has just vanished
might stare into the dark, vacant fields ahead,
knowing he cannot go forward, cannot go back.

This evening at JoeBeth I found a book entitled “1001 Books You Must Read before You Die.” Well, I wasn’t about to spend $50 on a list of books, so I came home and found the list online.

I find it a little suspect that they have 69 books from 2000 and later, but only 13 books from the 1700s and earlier. Oh, well, I’m a sucker for this sort of list anyway, so I’ll probably at least read through the list and see if I get any ideas of stuff I want to read.

This is a reading of How The Camel Got His Hump, by Rudyard Kipling, from the Just So Stories.

This book is one of those books that will always be best on paper, to be read aloud. Each of the illistrations in the book has an explanatory note, which tells about what’s going on in the picture and how it relates to the story.

I’ve put the pictures in the podcast, but not the explanations. I’ll keep experimenting with them, but I’m not sure what will be a good way to do them so that someone listening, and not watching, will be able to tell what’s going on.

Anyways, tell me what you think. These stories are some of my favorite, and I’m forcing myself to do them in order, and not just jump ahead to The Elephant’s Child.

The book Oliver Twist has been made into 27 movies. Very few of them are worth watching. Over the last several days, I’ve been watching the new one (2005) starring Ben Kingsley.

A great trend that I’ve seen in recent movies of classic books is that they actually follow the story line, rather than ad libbing. this rendition of Oliver Twist follows this new trend, and does a very accurate portrayal of the story as I remember it. It necessarily skimps on a few of the details, but is still very true to the original. And Kingsley is, as always, fantastic.

I recently finished listening to A Connecticut Yankee in King Arthur’s Court, from Librivox. It was far better than other things I’ve tried to listen to from there for one simple reason. One person recorded the entire thing. With all the others I’ve listened to, every chapter was a different voice, which was hugely distracting.

But this one was pretty good. The reader had an annoying habit of mumbling over norman (french) names that he didn’t know how to pronounce. And he frequently butchered English coloquiallisms, too. The bulk of the reading, however, was really very good, and conveyed this great story very effectively.

The biggest thing lacking with Librivox at the moment is their selection, which is very sparse. But they’ll get there eventually.

Yesterday, Alyssa Satin Capucilli, author of the Biscuit books, visited Sarah’s school and signed books. At least, she was supposed to sign books. But, somehow, in the excitement, Sarah’s book didn’t actually get signed.

Fortunately, being SuperDad, I planned ahead, and left four Biscuit books at Joseph Beth for her to sign when she visited there to sign her newest Biscuit book.

So now we have 4 Biscuit books inscribed “To Sarah. Woof.” 🙂

Alyssa Satin Capucilli is touring the USA signing her new books, and promoting the 10th anniversay edition of the original Biscuit book.

When I arrived home, there on my front porch sat a large box containing 20 copies of The Definitive Guide to Apache mod_rewrite. So apparently it’s available now. Hurry out and buy your copy. Go. Now. Are you still there?